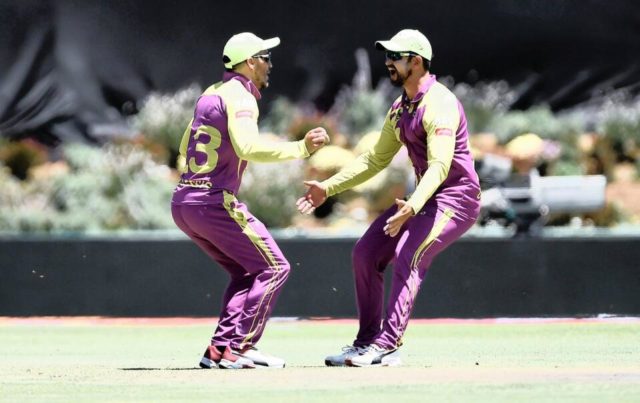 The Paarl Rocks booked themselves a home Mzansi Super League final with a thrilling victory over the Nelson Mandela Bay Giants at Boland Park yesterday.

The 12-run defeat was particularly galling for the visitors as they too were seeking the opportunity to host the final.

Instead, the Giants have to console themselves with a home play-off on Friday at St George’s Park, but for the Purple Army, it was a joyous occasion.

They have come out in their numbers all through the competition and were packed in again yesterday. There’s little doubt the “Sold Out” signs will be posted all around Boland Park for the final next Monday.

The victory certainly was earned with both batsmen and bowlers putting in a solid shift after the Rocks posted 168/5 in their allotted 20 overs. Although the openers Cameron Delport (39 off 22 balls) and Henry Davids (31 off 27 balls) posted a rapid 56 in just 5.4 overs, the wheels came off once Imran Tahir was introduced into the attack for the Giants.

The veteran leg-spinner put the brakes on with brilliant figures of 2/14 in his four overs.

However, Kyle Verreynne (36 not out off 20 balls) and Isuru Udana (27 not out off 21 balls) ensured the Rocks posted a competitive total. It was sufficient on the day due to the Rocks having not just one quality spinner, but two. Bjorn Fortuin was excellent, bowling his four overs for just 19 runs, while Tabraiz Shamsi finished with figures of 2/25.

The Rocks’ spin twins have been excellent throughout the competition and it is going to take a really superb batting line-up to counter the threat they pose in conditions that are tailor-made for the duo.

Heino Kuhn battled valiantly for the Giants scoring a 43-ball 58 but it was not enough to get his team over the line, especially after the Rocks put in a much-improved fielding display.

It has to be said that the Nelson Mandela Bay Giants’ march to the Mzansi Super League play-offs has been built around their group of experienced players, says Australian international Ben Dunk.

The opening batsman has been in scintillating form the last couple of MSL games, which has propelled the Giants into the play-offs and says he believes it’s the “old heads” in the Giants team who are helping them get over the line in a couple of crunch contests.

“We have found ourselves in tricky situations, but we have stayed really calm,” Dunk said. “We have been really positive throughout. We have quite a few older, senior players. I think T20 is a bit of an old man’s game. You need to be calm under pressure, make good decisions, adjust on the run.

“Sometimes experience really helps, and that really worked for us.”

The Giants were certainly staring down the barrel against the Cape Town Blitz on Friday evening at Newlands. The Blitz openers had raced to a record 86/0 in the Powerplay, but after a good comeback by the Giants bowlers, they managed to get home by 11 runs.

The turning point – pardon the pun – was the introduction of the legendary Tahir. The veteran leg-spinner claimed 2/22 from his four overs and put the skids on the Blitz.

“Our guys are older players. I don’t know the total number of T20s, but I assume it’s in the thousands. We can adjust to any wicket that we play on. It helps that we have the best leg-spinner in the world. He gives us an opportunity to get together and put a smile on everyone’s faces,” Dunk added.

Equally, the Aussie believes the Giants have yet to play the “perfect game”.

“I don’t think we have played our best game. We’re still getting there, but we’re here to win the competition.

“Realistically we’re two games away from winning the competition, and we are still building to go all the way,” he said.